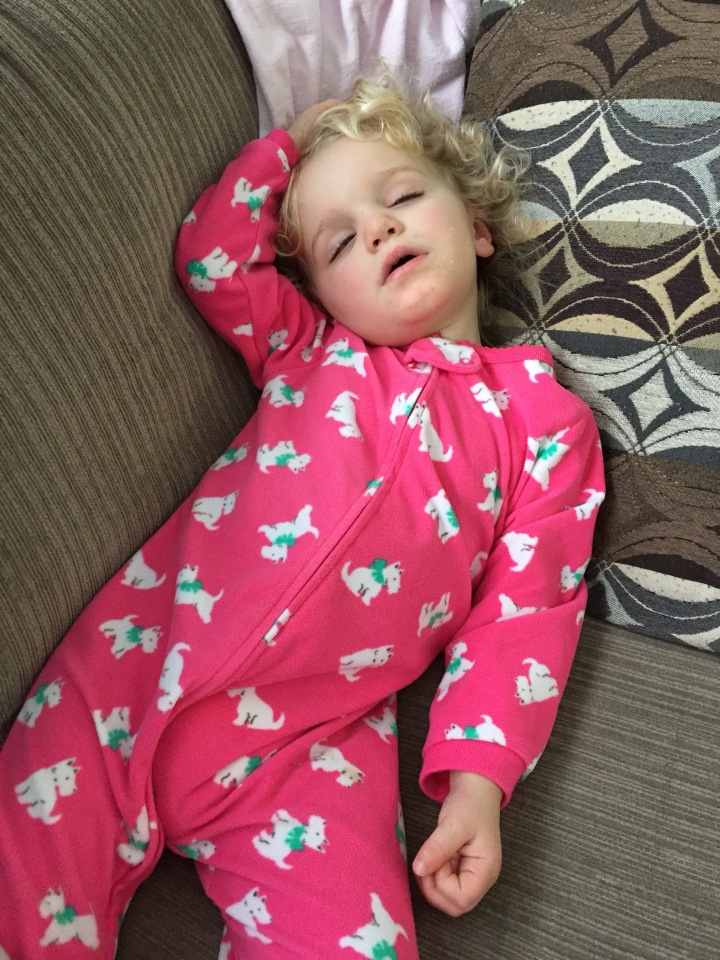 It has been a rough month of sleeping, but I think the rough patch is finally over!

Luckily for Emily it only lasted a day, but for the triplets it really threw off their schedule and habits. Before this they had excellent sleeping habits and would only wake up once throughout the night. They would go to sleep between 10-11 pm and wake up between 7-8 am, with one feeding usually between 4-5 am. They were eating cereal twice a day and loved eating their veggies. After the stomach flu they wouldn’t touch their cereal or veggies and were up constantly throughout the night.

Over the last 4 weeks we were lucky to get an hour or two of sleep straight. The triplets had been waking up multiple times throughout the night and at all different times. Olivia would wake up at 1, I would feed her, then she would go back to sleep. 2 o’clock would come around and then Jackson would wake up, I would feed him, put him back to bed and less than an hour later Levi would wake up. After finally putting Levi back to bed, it would be 3:30 and Olivia would be up again and the whole process of feeding and putting back to sleep began again. It was like this almost every night and some nights they would be so tired they would just cry and nothing we did seemed to calm them.

We came up with so many different reasons as to why they did not want to sleep and tried many different solutions. I know the fact that they weren’t eating their cereal played a part in them waking up to eat, but that is best saved for another post all together. We thought, maybe they were gassy or constipated, so we tried gripe water and giving them an ounce or two of just water, but that didn’t seem to help. At the beginning of all this, they were still sleeping in our room. Olivia was in the bassinet and the boys shared a crib together. We thought, maybe they were getting too crowded and would be better in their own space. So we set up the third crib, moved all 3 into one room and hoped this would help. It didn’t!

We tried bringing them into the bed with us and cuddling them, it seemed to help a little, but it would take a while to actually settle them down and they still wouldn’t sleep for more than 2 hours. We even tried bringing them downstairs and placing them in the swings, hoping the constant motion would keep them asleep. That only lasted a couple of hours.

The lack of sleep Dan and I got, definitely took its tool on us and our relationship. It was hard for Dan because he would get up to help me, but still needed to go to work all day and be able to function. For myself, it was hard because Emily would be up all day, the triplets would be up during the day and all 4 would still need to eat and be taken care of. With both of us being so tired, we would become irritated with each other over little things and it would result in us fighting. We would both try our best to not let the lack of sleep get to us, but it was hard.

I felt bad at times and felt like I wasn’t being a great mom. I let the lack of sleep affect me and during times when the triplets were crying, I would think of the pointless reasons Dan and I were in an argument and it would frustrate me even more. As a result, times when I would be calm and have no problem handling things, I felt I lacked patience and the ability to be calm to help the babies calm down. I think when you are stressed your baby can sense it, causing them to become stressed as well, which is exactly what was happening.

Dan and I almost went a whole week not talking to each other, which made me realize how hard it is when we don’t work together. At the end of it all, we didn’t even realize what we were arguing about. We also realized even more how important communication between us is. We were both feeling the same way and let the lack of sleep get to us and had we talked about it the moment we felt it was, we could have saved all the trouble of fighting. In the end we stopped to think about everything, had an entire day to talk things through and work things out and were able to come to the conclusion that working together is the best thing.

For the last 5 nights Olivia, Jackson and Levi have slept through the night! They have gone to bed by 9:30pm, have woken up between 5-6 am, have gone back to sleep and got up for the day between 8 – 8:30 am. It has been the best feeling to sleep for 4 or 5 hours straight and it truly makes the biggest difference in how you function during the day.

I don’t know the exact reason as to why they have gone back to sleeping through the night, but I can only hope that it lasts for a long time. Maybe they were going through a growth spurt, maybe they were not feeling 100% from the stomach flu, or maybe they were just uncomfortable. The only real difference that we did do, was to put them in outside onesies. We did this for Emily and we found she slept right through the night and also because I was too scared to use blankets in her crib when she was sleeping in a different room. I think that it gives them a sense of comfort and closeness and it also keeps them warmer than a blanket would. For us this has worked for the last 4 nights and we have both seen an improvement in our mood and it has been so nice to sleep through the night!

Have you experienced sleepless nights with your little ones? At what age did they finally sleep through the night?

Do you have any tips or tricks that you found worked the best to help your little ones sleep through the night?

Are you still experiencing sleepless nights and if so what are the challenges and problems you have become of this?