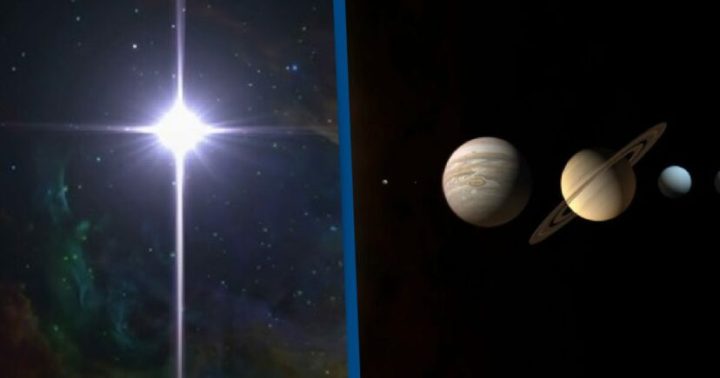 Monday, December 21, is a good night for stargazers, as they’ll be able to spot a ‘once-in-a-lifetime’ star.

Dubbed the ‘Christmas star’, Jupiter and Saturn will come into close proximity to one another causing a ‘double planet’ phenomenon, meaning they will appear as one, bright star. It’s said they will be within 0.1 degrees apart.

It’s been named the ‘Christmas star’ because most people will be able to view it tonight, just four days before Christmas.

Apparently the two planets only come this close once every 800 years, making it extremely rare. According to the Perth Observatory, the last time this happened was July 16, 1623, while Galileo Galilei was still alive. At the time, the planets were just 0.14º apart.

But why does this happen, I hear  you ask? The Perth Observatory explained:

The conjunction is happening because Jupiter is catching-up on, and over-taking, the slower-moving Saturn in our line of sight of the planets from Earth. Since Jupiter takes 11.86 years to orbit the Sun and Saturn takes 29.4 years, every 19.85 years they will appear to pass each other in the night sky and when they do, we call it a ‘Great Conjunction’.

It went on to explain that the last ‘Great Conjunction’ was a decade ago in May 2000, but it was ‘almost impossible’ to see because the two planets were 4.9° west of the Sun from our point of view, meaning the sun’s glare prevented us from seeing it.

Advising people when best to look for Christmas star, the observatory said the exact time of the conjunction will be 1.20am Australian Western Standard Time (AWST) on December 22, or 6:20pm Coordinated Universal Time (UTC) on December 21.

It’s predicted that the next great conjunction won’t be until 2040, so you’d best get your telescopes at the ready for Monday