In honor of Throwback Thursday,I thought I would share my experience meeting Emily!

It all started on April 4th, 2013 when I found out I was pregnant for the first time. I was so excited, but nervous and felt my whole life changed from that moment on. A month prior to finding out, Dan and I had gone to Las Vegas for our 6 year anniversary and as the saying goes “what happens in Vegas, stays in Vegas.” Well for us that wasn’t the case, so as a joke when I told people I was pregnant I said “what happened in Vegas, didn’t stay in Vegas.” I know it was cheesy, but that was the whole point and it just worked so perfectly!

Dan was the first person I told, followed by my friend Erica and my sister, Jessica, who I did tell the Vegas joke to, but didn’t find it as hilarious as I did! We decided to hold off on telling everyone until we reached the 12 week mark, just as a precaution because you never know what could happen. I also wanted to tell my mom first and since Mother’s Day was only a few weeks away, I planned to wait until then to tell her. I surprised both my mom and my nanny with a candle. One said “nanny” and the other said “great-nanny.” My plan was for my mom to open hers first and read “nanny,” then thinking that I got the bags mixed up, pass it to my nanny, only to realize hers says “great-nanny” and then voila, they realize what is going on. To my luck, my plan went exactly how it should have and they were both shocked and surprised.

My original due date was December 6th, 2013 and we thought for sure that would be the day. I was laying in bed not feeling the best and threw up a few times, which I read can sometimes be a sign of labor, so I called Dan. We left as soon as he got home and drove all the way to Toronto, I threw up a few more times on the way, and I messaged everyone to let them know it was happening. When we got to the hospital I was told I was only 1 cm dilated and I couldn’t be admitted. We stayed in a hotel over night just in case, but nothing happened and turned out I only had a case of the stomach flu and got everyone’s hopes up!

The next Wednesday, December  11th, 2013, in the evening, I felt contractions starting and this time it felt different then before, so I knew it was really happening. I called Dan again, got all my stuff ready to go and even had a few minutes to do my hair. We left as soon as he got home and on the way I messaged everyone again to let them know. We registered at the hospital, went up to triage and they told me I was only 1 cm again, so I couldn’t be admitted and had to leave. At this point my family had already left, so when I told them they turned back around and headed home. We stayed in a hotel again in case something happened and since I had an appointment the next morning it made sense to stay close by.

It was around 11:30 pm when we arrived to the hotel. I thought my water broke, but without the typical puddle of water that I was expecting, I didn’t think anything of it after. We were both so tired and tried to go to bed right away. Then around midnight, my contractions started intensifying. I looked up different ways to help with the pain and read to sleep, walk around and take a bath. Walking around didn’t do much, I tried taking a bath, but was bored and got cold. When I tried to sleep I just remember thinking to myself “who is actually capable of sleeping through this pain and if they can, they are so lucky!” I always thought I had a decently high level of pain tolerance, but nothing prepared me for the contractions. I was also told to keep track and watch for them getting closer together. This lasted for 8 hours and they were all over the place. Sometimes they would be 5 minutes apart, then 10 minutes, back to 6 minutes, then 15 minutes. There was never any consistent timing.

We went to my appointment the next morning and I had only dilated to 2 cm! I couldn’t believe it! 8 hours of pain and I only dilated 1 extra cm! They told me to walk around, get something to eat and then head to the hospital. We waited about an hour after going to Tim Horton’s and made our way to the hospital. When we arrived, after registering again, we went to triage and by some luck I was 4 cm dilated and could be admitted!

I was given an epidural right away to prevent my heart from working hard and becoming strained, which was a relief because by this point I was over the contractions! Long story short, I have a congenital heart defect, which was a concern during the course of my pregnancy and delivery and my doctor recommended I get an early epidural to reduce the strain on my heart. This was now around noon on Thursday and after the epidural I was bed ridden and not allowed to eat or drink, except for the occasional sip of water and a few ice chips. [Side note: When all you can have is ice chips, they become the best thing in the world and I swear I was addicted to them after!]

With the epidural it did start to slow down the labor process and reduce the frequency of my contractions. They also had monitors hooked up to monitor Emily and her vitals, which was the scariest thing. I would watch her heart rate go up and down and at 3 different times her heart rate plummeted so low that the signal went off and the nurses came running in. When this happened I was having “tetanic contractions.” I was told a tetanic contraction is a contraction that lasts for minutes and constricts the oxygen supply to the baby inside.  When I had them they lasted for 7 minutes and this is what caused Emily’s heart rate to drop. To correct the situation I had to lay back flat on the bed and wear an oxygen mask. After the first time my eyes were glued to the monitor screen and I was constantly watching and worrying if it would happen again. I did have a little buzzer right beside me and if needed I could press the button and the nurse would be right there.

I lied in bed all day and labor moved along very slowly. Luckily Dan was there to keep me company and my family also arrived so they were in and out keeping me company as well. It was now night time and the nurses said it may be best if everyone left so I could try to get some sleep. It was hard to sleep and even though I had the epidural and couldn’t feel the contractions, I still felt tremendous amounts of pressure. I did get a dose of morphine through the epidural to help ease the pain, but I found it didn’t do much.

The next morning, Friday December 13, the nurses came in and took a measurement and said I was 9 1/2 – 10 cm dilated and I could start pushing soon. An hour or so later another nurse came in to check again, but this time I was only 8 cm dilated. They didn’t know how that was possible, and thought it may be due to the fact my water hadn’t broke, since I didn’t think it did. They did an ultrasound and determined my water did break, but that Emily’s head was tilted upwards so she wasn’t coming out. This was causing my cervix to swell due to the constant pushing of her head and as a result I was going to have to deliver via c-section. When then told me I was devastated and it was hard to know I had just gone through hours of labor and made it to 10 cm just to have a c-section. I knew that the nurses and doctors knew best and if they said a c-section was needed then a c-section I was having.

They had to prep me and after a set of twins was delivered it was going to be my turn. I had to go into the room by myself and once everything was in place and the blue curtain was up, Dan was allowed in. I was so nervous the entire time and felt like I was going to pass out. I squeezed Dan’s hand as tight as I could and just kept thinking to myself don’t pass out. I was also so excited to finally find out if we were having a little boy or girl! Dan watched as she was delivered and told me “it’s a girl!” I was so happy to finally know the gender and we could finally choose a name. When they cleaned her all up, they brought her over and she was the cutest baby I had ever seen! As much as I wanted to look at Emily, all I could focus on was not passing out. It also didn’t help that I was listening to the doctors and what they were saying. At one point they had to call another doctor to make sure I was okay to be given something to stop the bleeding. I lost almost a liter of blood and what they gave me to stop it made my arm all tingly, which worried me even more. Luckily everything went smoothly after that and once I was all stitched up, we went up to a room and I finally had the chance to meet Emily! 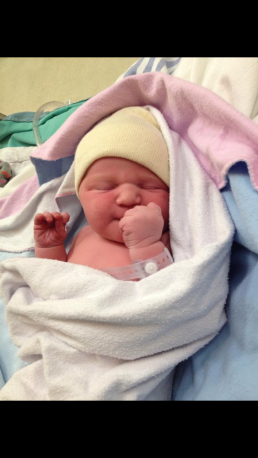 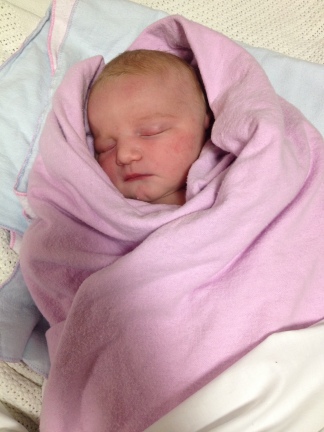 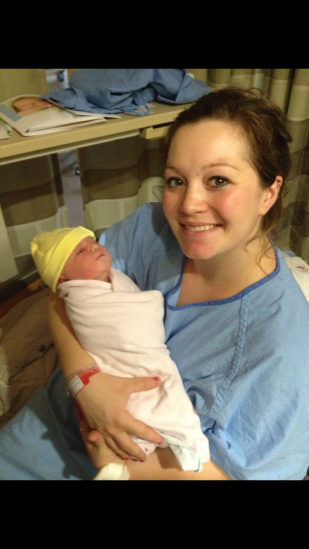