The second week of school has come to an end and I cannot believe what happened!

If you recall from my previous post, the first week of school was full of tears every morning and a lot of “I don’t want to go to school” and I was expecting all of that plus more as the second week started. But in a shocking and I mean SHOCKING turn of events, we didn’t shed a single tear on Monday morning or the rest of the week for that matter!

When I was talking to the triplets’ teacher the first week of school, we both agreed that by the end of the week things may get a little better, but come Monday of the second week, it will feel as if we are starting all over again. The weekend would act as a break for the kids and then on Monday they will be aware of what’s happening and would likely be just as upset or more than they were the first day of school.

Throughout the weekend Jackson would repeatedly tell me that he did not want to go back to school and would get upset if I said that he had to. I tried to avoid the topic of school, but when it did come up, I would talk about all the fun they had and remind Jackson of how excited he was to play with the red fire engine everyday. It would help for a few minutes, but then he would go right back to being upset and telling me he wasn’t going back.

I felt so bad because I didn’t know what else I could do to change his mind and show him that he really is going to enjoy school. It’s not as if he cried every minute of the day when he got into school, it was only the initial going in part that was upsetting and after that the rest of the day was amazing. I just thought to myself that hopefully after the second week, he would feel a bit more comfortable and the sad feelings about school would turn into happiness and excitement.

Monday morning rolled around and I prepared myself for the worst. Even while we were getting ready, eating breakfast and getting dressed Jackson was still insisting that he was not going to school. He even tried to tell me while I was getting him dressed that his tummy hurt and although his face looked rather convincing, I knew it must have just been his nerves for school because he was fine right before telling me and right after he went back to running around. 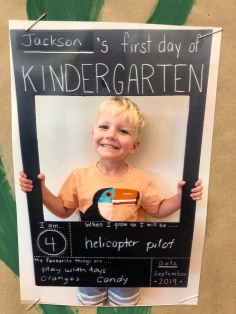 Levi, Olivia and Emily on the other hand were all set and ready for school. Levi walked in all by himself on Friday, so I told him that he couldn’t start crying again after he already went in with no tears. He had also been telling me all weekend long that he was not going to cry going in to school and that he was going to be a brave big boy!

As we were walking to school, I thought about picking Jackson up in the afternoon and spending some one-on-one time with him in hopes it would help him and bring him some comfort with the school transition. As I was in mid thought, when we were about half way to school, Jackson stopped, turned to me and said, “Mummy, I am going to be a brave boy and I’m not going to cry going into school.” I couldn’t believe what I was hearing, but it made me so happy. So I said, “Okay, that’s so exciting Jackson! I knew you were a brave boy!”

We dropped Emily off first and said goodbye and then headed over to the triplets’ line. Levi, Olivia and Jackson stood in line together with their backpacks and patiently waited for the bell. I was so in shock that all three were just standing there, not trying to run away and not crying!

I could tell Jackson was a little nervous, but he stood there like the brave boy he said he was going to be! I gave them all a big hug and kiss and when the bell rang, they all walked in together and all by themselves!

As I started walking home, I stopped by their classroom window and Jackson and Levi came running right over. They had the biggest smiles on their faces and I kept giving them a thumbs up to make sure they were okay and they gave one right back to me. I waved bye and they ran over to the carpet.

I left the school feeling so happy and so proud of them both! Part of me thought that this was harder to say goodbye because I found comfort in knowing they needed me, but this time it felt like they grew up again overnight and didn’t need me anymore. Of course I want them to go in independently with no tears because that’s what I had been trying to get them to do for the past week, but it was still hard to see. Maybe that doesn’t make sense, but I would describe it has a happy and sad moment for myself!

Drop offs for the rest of the week went so smoothly. It was so cute because each morning Jackson and Levi would tell us that they were not going to cry when going to school and when I picked them up they reminded me that they didn’t cry in the morning. Each time we told them how proud we were and I hoped that the encouragement would help them continue going in to school with a big smile on their face!

I cannot forget about Emily and Olivia and I have to give them a big shout out because they may not know it, but their excitement and ease of school has made my life so much easier. Having Emily’s school line around the corner from the triplets, makes it hard to say goodbye to all of them in the morning, especially when Jackson and Levi wouldn’t go in easily. Knowing Emily was capable of standing in line by herself and going in without me there, allowed me to spend the extra time with Jackson and Levi.

I was so excited on Wednesday, which may have been the smoothest and easiest morning so far, because I was able to watch the triplets go in and then quickly run over to see Emily go in. My goal is to have many more mornings like that, but if not, I’m going to try and rotate between the triplets and Emily each morning!

We also had Meet The Teacher Night at school, were Emily and the triplets got to show us their classroom and where they sit! The triplets showed us how they sit on the carpet and Emily showed us her desk. It was so fun to get a little glimpse into their time at school!

It is such a big adjustment for kids, parents and families, whether it’s your first, middle or last child starting school. Each child is so different and each year can be so different as well. I’m so happy that Jackson and Levi have found their groove with school and to any of you out there whose children are still adjusting to school, I hope it’s getting a little easier!

I would love to hear how the school year is going for you so far, so please share in the comments below! What has been the high points and what has been the low points for you? Has it been easier or harder of an adjustment then you originally thought? I’d love to know!

One thought on “I Didn’t See That Coming!”