When I was growing up, playing with Barbies was probably my favourite thing to do. My sister and I would play for hours, creating different stories, building and setting up their houses and dressing our Barbies in the different clothing we had. I remember having beauty pageants for our Barbies and we would dress them in the biggest and prettiest dresses we had, even fighting over who got to take which dresses. To us, Barbies were all about the clothing, style and everything being pink. I remember thinking how awesome it would be to be a real-life Barbie.

As kids we had an endless imagination and the ability to create any reality for our Barbies, from style icons, to fire fighters, to rock stars, to astronauts, Barbie helped me to realize that girls really could be anything. 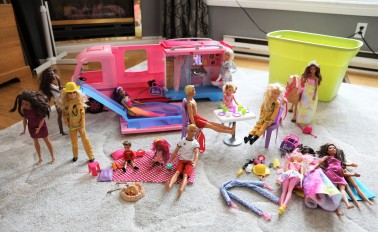 But as time went on and I became older, times changed and the reality that girls and women can be more than a pretty dress began to grow on me and the amazing thing is that Barbie is helping girls see this at a younger age, too.

As girls and women, we are not limited to what was once the idea of what girls and women should be, we have endless possibilities to be anything and nothing should stand in the way of that.

This year Barbie celebrated her 60th anniversary and in those 60 years Barbie has had over 200 careers, breaking through all the plastic ceilings! On July 5th, Barbie continued to break through those ceilings, when a very special Barbie Astronaut Doll, launched into space.

The launch was part of a full day of summer camp activities, held in partnership with Canadian not-for-profit STEM Camp and they were able to track her entire journey. Astronaut Barbie was launched to space using a high-altitude weather balloon and she was then tracked and retrieved after her three-hour journey, which was all recorded by an action camera.

We were actually invited to attend the launch, but sadly could not make it, but it’s pretty amazing to know we are capable of sending Barbie to space as well as being able to watch the entire journey. Luckily a video of the launch was created, and you can watch below!

Barbie partnering with STEM Camp is such a great thing to see and together, thinking of such a fun and engaging way for kids to learn about the technology, science and process of what it takes to launch Barbie to space is truly amazing. The focus of Barbie’s partnership with STEM Camp is to encourage and increase children’s interest in STEM and reduce the factors limiting girls from pursuing careers in STEM and I think they have done just that.

As a role model to so many young girls, my self included, it’s been amazing to see the progress and barriers Barbie continues to push. I think it is so important to have such an iconic, well-known and loved character using their platform to encourage, teach and represent girls and women in all sorts of ways, from careers to appearances and everything in between. As someone who loved Barbie when I was a little girl, to now having two of my own who love Barbie, I can take comfort in knowing they have someone to look up to as a role model, who will show them that girls and women can be anything they want to be!

*We have partnered with Barbie to share with you the video of Barbie’s Launch To Space. All opinions and thoughts in the post are my own!